Have you ever been to the gym, tried an exercise that seemed absolutely fine at the time but the next day you could barely roll out of bed?

This pain is not just confined to people who don’t exercise regularly but can also be experienced by athletes when they increase the demands upon their own body. It is called Delayed Onset Muscle Soreness (DOMS) and usually starts about 12 hours after the offending activity has been completed and can last for up to 72 hours or more! Ouch! 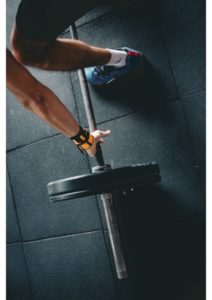 So, what is DOMS? An Overview

Originally it was thought to be due to inflammation as a result of muscle tears caused by eccentric exercise. It now looks as if inflammation does play a role, muscles not as much as first thought but nerves and fascia may also be key players in DOMS (or muscular hyperalgesia). Cheung, Hume and Maxwell (2003) believe that DOMS is aprobably a combination of at least two theories (but we still don’t know which two!).

Each muscle fibre is covered in fascia and innervated by a nerve with many nerve endings. It is not difficult to imagine a scenario where during an exercise, there is some sort of damage to a nerve ending.

In reaction to the injury, inflammatory markers are released to enable blood vessels to dilate and a host of other substances can quickly get to the injured site to enable repair.  For example, when the nerve is damaged, it produces Nerve Growth Factor (NGF) that ultimately helps nerves to recover and grow (neurogenesis) 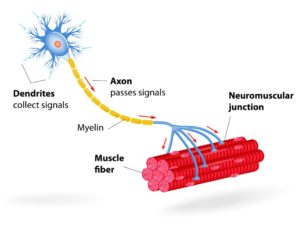 The nerve and muscle relationship: it is easy to imagine how a tear in the muscle fibre could elicit a nerve ending response

As time progresses, the inflammation continues and the amount of additional fluid that has arrived at the injured site is more than can be taken away and so it seeps around cells to create swelling (oedema). Oedema pervades neighbouring tissues and oozes out of gaps in the vascular structures of the tissue and as it gets moved and compressed between different structures and fascial layers. Could it be that this oedema spreads NGF, causing widespread pain.

When we experience DOMS we are temporarily weaker, our range of movement decreases and it is painful.

But why would the body produce a response that inhibited our strength and movement albeit for a short time?

We also know that as we repeat an exercise over time, we get better at it and can increase the intensity of the workout. Thus, making those muscles stronger by making changes to adapt to the intensity of the exercise. This would make sense in evolutionary terms. It would also help to explain why we get used to performing a particular exercise and experience discomfort when we try something new!